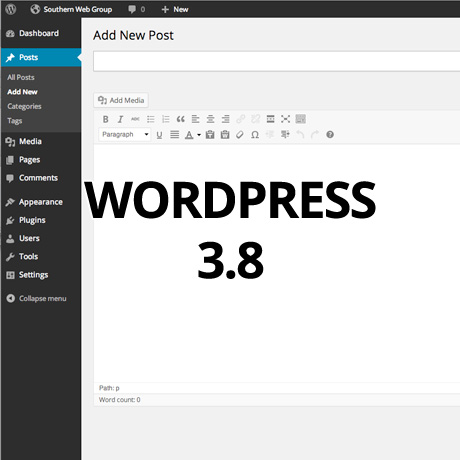 Features as plugins! That’s what’s in store in the latest WordPress iteration, version 3.8, now in its first beta version with the next target release dates set – WordPress 3.8 Beta 2 on November 27, code freeze on December 5th and a final release on December 12th. This latest beta version brings together several of the features as plugins projects which include: Admin Help Improvements, Media Library Grid View, Pages & Menus Merge, Better Signups, JSON REST API, among many feature developments being worked on.

The guys over at WordPress.org even made a haiku specifically for this release:

Alphabet soup of
Plugins as features galore
The future is here.

Several items that developers (if you are one) are being asked to test include:

Developers are also being asked to test as many plugins and themes with admin pages against the new features including how to make the admin interface fit the MP6 aesthetic better. For those who are certified WordPress geeks, you can have fun trying to break 3.8 and finding all the bugs and loopholes you can. If you think you’ve found a bug, you can post to the Alpha/Beta area in the support forums. Or, if you’re comfortable writing a reproducible bug report, file one on the WordPress Trac. There, you can also find a list of known bugs and everything that has been fixed so far.

You may Download WordPress 3.8 Beta 1 (zip) or use the WordPress Beta Tester plugin to grab your copy.