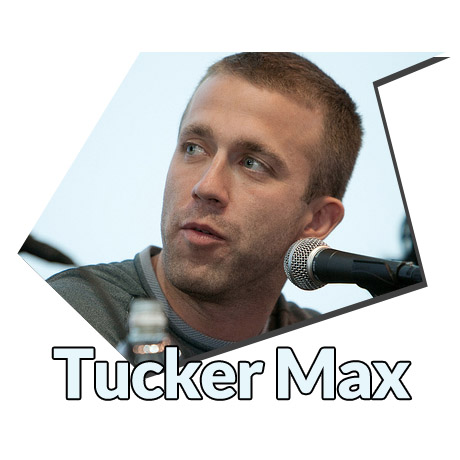 You either love him or hate him – a common reaction when you hear the name Tucker Max. But there’s more to this foul-mouthed #1 New York Times Bestselling author of I Hope They Sell Beer in Hell than meets the eye. Tucker Max was one of the guest speakers in the Traffic and Conversion Summit 2013 held early this year and he shared some practical and valuable insight as to how he became a successful author despite the odds against him. Here are some of the nuggets he shared during the event:

Publishing a book is just a “Trojan horse” to establish your reputation and do bigger stuff. Published authors have a lot of more perceived prestige and respect vs. marketers.

Book is the best way to become an authority of your field. Use books to build media and brands

Ryan’s model for launching a new brand: Find a thought leader, publish a hardback book, use as a self-liquid offer, use that to build a brand and media

At the very least, publish a Kindle book

On Getting Opt ins from books:

On Dealing with Competitors

“As marketers, we’re often seen in a bad light. Society views us scammers. It doesn’t matter how much money you’re making, you’re always going to be associated with scams, frauds and a lot of other slimey stuff.

But if you’re a published author, then everything changes. Suddenly, everyone respects you. Because you wrote a book. You almost have the same social status and prestige as movie stars and musicians now.The coolest part is, you don’t need to seek a publisher. You can self-publish on Kindle nowadays.

Also, keep in mind, you don’t want to publish books to make money (because chances are most people won’t make much, no matter how many little kindle eBooks they pump out). The real purpose is to use your book as to establish your authority and expertise in your niche.

Don’t go out and look for attention. Just focus on creating the best thing you can create. Worry about what you’re creating 80% and the marketing/selling 20%.

Tucker Max generated a huge following on his website prior to publishing his first and highly successful bestselling book. He has published several books since then. He had an epiphany that started after his first book was published and has announced that we was leaving behind the lifestyle that made him famous. He has turned into a health buff and he is also a mixed martial arts practitioner.