Get Paid for Social Networking

So I never really got into the whole MySpace thing that much. I’ve used facebook a bit more but that’s mostly my wife’s fault. However, I’ve recently joined another social networking site and I might actually use this one. Why? Because they pay you to use it.

Yuwie.com is, from what I’ve seen so far, very similar to other social network sites. It’s free to sign up, you can blog, upload pictures, create “clubs” (which I believe are similar to Facebook’s groups), and you’re paid by the number of monthly page views you generate. The site is quite new best I can tell but it appears to be growing rapidly. According to the website, they added more than 1800 new members today. That’s a pretty staggering number but it doesn’t surprise me all that much and I’ll tell you why. Yuwie gives you credit for referring people to the site up to 10 levels deep!

I don’t know about you, but as soon as I hear about several levels or tiers when it comes to referrals a big red flag goes up and I immediately think pyramid scheme. Flashes of all those Algoco posts proclaiming how you can make thousands just by surfing the net sprang to mind. Naturally, I did a bit of digging around before deciding whether or not to sign up. It definitely does appear that those who jump into this early and start referring friends are going to be the ones making the most money. However, I don’t think this really qualifies as a pyramid scheme. For one, you’re earnings aren’t dependent on referring people. You can generate as many page views as your marketing methods will allow. Imagine getting one of your Yuwie blog posts to the front page of Digg or Stumbled a few times. Finally that hoard of traffic would be automatically monetized. And besides, even if you don’t earn anything from it, you’re still networking and connecting with others like you would on Facebook or MySpace. I mean those site’s don’t pay you do they?

The other factor that alleviated my concerns was that people were openly sharing how much they’ve made…. and it’s not been all that much. So far it looks like people are generally making less than $10 a month. You didn’t read that wrong, this actually made me more comfortable with the site. If people were talking about getting rich using Yuwie and how they are just waiting for their huge payday, I’d probably leave the site and never look back. This site doesn’t appear to be promising that you’ll make a fortune, they just seem to be saying “if you’re using sites like this anyway, why not get paid a bit too?” 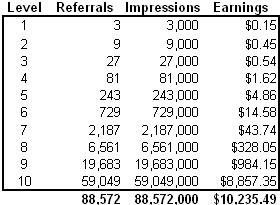 They do include this “example” graph of what your earnings could look like if you referred three people and each of those people referred three people and so on up to level 10, however, no one on the site, especially the members, are promoting it as a get rich quick program. To me, that’s a much more believable situation and something I feel like I can be a part of. I might end up using it for a week and forgetting about it like I did MySpace, but then again, maybe not. Maybe I’ll end up wasting an hour or so of my time and a post as well, but I also might end up making a few extra dollars a month as well. Either way, I figure it’s worth a shot.

Now, before I start to sound too much like an infomercial, let me point out a couple of things.

1. You have to have a minimum of $50 before you can get paid.
2. We pay net 60 which means any earnings for August will be paid around November 1. (We have to collect from advertisers before we can pay you)

To Yuwie’s credit though, they made those points abundantly clear and in fact that’s a direct quote from their site. While I’m not a fan of the net 60 part, I do appreciate them being up front about issues like that.

So, if you’d like to sign up for Yuwie (again it’s free) and give it a shot as well, I’d appreciate it if you’d do so using one of the links in this post. If you do you should be greeted with a short video and then be taken to a screen with a familiar picture in the referrer box like so:

And, no matter how you end up signing up, or if you’re already a member, feel free to add me as a friend. My profile URL is http://www.yuwie.com/profile/?id=56596 and all you have to do is click the “add friend” button. You might want to put “blogging experiment” in the message field just so I can separate readers from random people surfing around the site. I look forward to seeing you on there!

Oh, I almost forgot, hat tip to Dazzlin Donna for alerting (and referring) me to this.

Many sites like facebook, orkut etc are connecting people with one another. But there are some other ways through which people can get connected such as through traditional emails, telephone calls, wireless camera etc. The wireless internet cameras can be used with the computer and the services are given by wireless internet providers. These providers give wireless hardware, wireless internet equipment, firewalls etc to their clients for social networking. The wireless phone is also one of their services, which is already available in many public locations, such as airports and all Starbucks locations. Wireless Internet suppliers take either fix fee or a fee for actual time used. So, wireless internet how to speed up can be done through different ways but the simplest way is wireless internet booster. It will not only increase the speed but also enhance the quality of wireless internet signal while connecting to love ones.

3 Things I Learned by Selling My Blog

9 Responses to “Get Paid for Social Networking”