Why I Don’t Use AdSense

Over the weekend, Ognjen of Ioncenter dropped me an email that I thought would be great for this week’s Reader Question Session. Ognjen asks,

“I was wondering, why don’t you use Google AdSense in your blog?”

Well, to be honest there are a few reasons. The first one being that my AdSense account was banned more than a year ago for reasons still unknown. Now I realize that if you ask the inmates, there are no guilty men in prison, but in all honesty, I never broke their terms of service or participated in any type of click fraud or anything like that. I simply logged into my account one day and poof, it was gone. I of course appealed but Google would not provide me any information (even such basic things such as which domain the fraud occurred on, or a date range for me to pull my log files) about why I had been banned and denied my appeal. Now it appears publishers often receive warnings before being banned but I guess I just wasn’t that lucky.

I guess the silver lining of getting banned was that it opened my eyes and for the first time I looked more critically at the AdSense program. When I did, I saw several things I saw that would keep me from running AdSense ads on this blog, even if I hadn’t been banned.

Obviously the first issue that would worry me about using AdSense is the vulnerability factor. If my account could be banned for actions that I had no control over (and if you do some searching you’ll find I’m not alone), why would I want to put my earnings at risk? When Google bans you, they don’t pay you the balance you’re owed minus whatever clicks they have decided were fraudulent. They keep every dime that’s left in your account, whether it was earned honestly or not. Luckily for me, I had only a few hundred dollars in my account. While that most certainly wasn’t a pleasant experience, it could have been MUCH, MUCH worse.

Now how many of you are going to sign up for that offer? When it’s presented like that, probably not many. However, when you sign up for Google AdSense, that’s essentially what you’re doing. You’re agreeing to let Google determine how much they should pay you for each click. Of course, they don’t disclose what percentage they pay you, so they can actually change your share at any given moment. If they’re paying you $1.00 a click, the next day they could pay you $0.50 for that same click and you’d never know it.

As if that weren’t enough, Google also get’s to decide which clicks they pay you for! Think hitting the front page of a popular social media site will increase your AdSense earnings? Not so fast. Steve over at Ramblings of the Marginalized has some pretty solid evidence that Google is discounting any clicks when your site gets a surge in traffic. That’s on top of the fact that Google could count only 8 out of every 10 clicks and you’d have absolutely no idea and no recourse. So, after all that, if you’re still interested in running Google AdSense, I’ve got one final reason you shouldn’t.

The best reason NOT to run AdSense ads on your site is a simple one. You’ll be losing money. Over the years webmaster after webmaster has realized that they could earn more money by running affiliate ads, offering private ad sales, or even running ads from other programs. One sports site I developed used Google AdSense (preban obviously) was doing pretty well and earned an average of about 35 – 40 cents a click. I thought that was just dandy until I came across an affiliate program that would pay me a flat fee of 50 cents per click for running their ads on my site. Now I don’t know about you but I’d take a 25% raise any time I can get it. The worst part of it was when I realized just how much money I had thrown away over the time I had been running AdSense. While that’s just one story, I’m not alone on this either. John Chow recently gave up on AdSense, and it’s no coincidence that none of the top dogs run AdSense on their sites.

To sum it all up, I don’t use Google AdSense because not only could you be banned at any time, you also have no idea how much you’re going to be paid per click, or how many of the clicks you generate will be counted and, last but not least, you’re probably not making as much as you could be off those clicks in the first place! If you’re currently using Google AdSense on your blog, I’d challenge you to take some time and research a few other ad sources. You’ll thank me for it later. 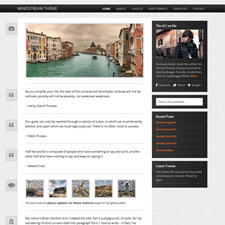 31 Responses to “Why I Don’t Use AdSense”