Learn from the Gold Rush: SHUT UP!

written by BlogEx on January 24, 2008 in Blogging with 43 comments
← older posts newer posts →

In 1848 a foreman working in a lumber mill noticed something strange as he was working. He mentioned this to his boss and the two began to investigate a bit further. Before long it became obvious that the foreman had discovered something that could make both men incredibly wealthy. Knowing that if their secret got out, they’d be ruined, the men attempted to keep the discovery quiet. Unfortunately, rumors began to fly and within two months of the groundbreaking discovery, it appeared in a local paper. News spread much slower in those days but just a few more months after that, the discovery made it’s way into a national paper and then even into a Presidential speech! 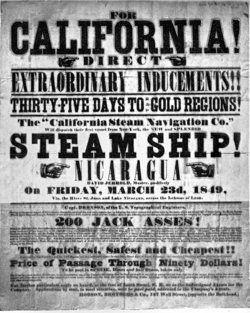 The discovery, if you haven’t figured it out from the title, was gold. The foreman’s name was James Marshall and his boss’ name was John Sutter. As I said, when Marshall discovered the valuable metal, Sutter tried to keep a lid on it. He knew what would happen if word got out and just as he had feared, by the time the gold rush of 1849 was over, nearly 300,000 people had descended on California in search of riches.

You might think Sutter wouldn’t care. After all gold had just been discovered on his property and he had a significant head start on the rest of the prospectors. You might think Sutter would have been rich beyond his wildest dreams. Unfortunately, you’d be wrong. His workers abandoned their jobs to begin mining and before long squatters had taken over large chunks of his land. As if that weren’t enough, Sutter’s crops were destroyed or stolen as were his livestock. In short, he was ruined.

While I may have bored you to death with that little history lesson, the story perfectly illustrates the point I wanted to make. Lately I’ve seen a lot of people writing about different discoveries they’ve made that could be very useful. Maybe it’s a new source of traffic, a new place to get quality links, a new way to game a system, whatever. The point is they’ve discovered something that’s going to help their blog. And what’s the first thing they do? Why they post about it of course.

For crying out loud people, if you find something that is going to be a powerful tool for you or will help you make more money, SHUT UP! Sutter tried his best to keep the discovery of gold from getting out to the public. But despite his best efforts, it was national news before the year was out and the opportunity was gone.

In our online world gold rushes happen at incredible speed. A simple blog post can bring thousands of people trying to exploit whatever it is you’ve just discovered. I understand the whole community aspect of blogging, I really do. When you find something it’s natural to want to tell someone. But the instant you let that information out, you’re killing off whatever opportunity or benefit you’ve just found. What’s worse, you’re not just killing the opportunity for yourself, you’re also ruining it for everyone else, including anyone that had discovered it before you but had the foresight to keep it to themselves.

John Sutter died a poor man having never benefited from the discover of gold that made many others rich. Learn from his experiences, and the next time you find the webmaster’s equivalent of gold, please for all of our sakes, shut up about it.

Lessons On Blogging: What Passing Out Flyers Can Teach You

43 Responses to “Learn from the Gold Rush: SHUT UP!”