Learn from My Mistakes: Eggs in One Basket

written by BlogEx on December 6, 2007 in Blogging and Mistakes with 17 comments
← older posts newer posts →

Last week I introduced a new feature series called Learn from My Mistakes in which I discuss some of the mistakes I’ve made along the way and how to hopefully avoid them. While the series will usually deal with mistakes I’ve made here on Blogging Experiment, this week’s mistake was actually made on a different site completely. However, I think there are valuable lessons to be learned so I decided to just post it rather than make the mistake over again on this site simply to stick with a week old tradition ;). 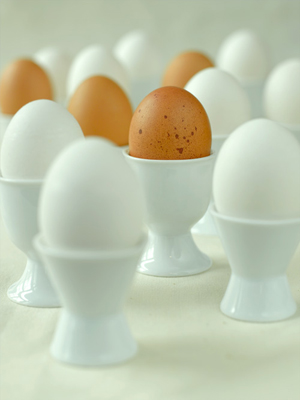 The mistake, as you probably figured out from the title, is putting all your eggs in one basket. This topic has been discussed several times in regards but is usually applied to monetization methods. For example, many prominent bloggers will warn you that making all your income from one single source is a dangerous game. If your site depends on Google AdSense for example, what happens if your account is banned? If you have one very large advertiser what happens if that advertiser goes out of business or has fewer funds for advertising?

The premise has also been discussed in terms of traffic sources for your site. Most SEO’s will tell you not to depend too heavily on search traffic from Google because the search leader is notorious for changing the way they rank sites, making it an unreliable source of traffic. A great recent example would be John Chow’s site. Although he ranked quite well for some very popular terms, if his site had depended solely on the traffic from those search terms, he would have lost all of his traffic when Google decided to penalize him.

So as I said, the over arching principle has been discussed many times in regards to blogging. However, today I’d like to apply the age old lesson to a slightly different area of blogging… your topic.

Back in 2005 the St. Louis Rams had a head coach by the name of Mike Martz. I won’t bore those of you who aren’t sports fans with all the painful details but suffice it to say that I was less than fond of Mr. Martz. In fact, I pretty much hated the man. Well not so much hate as loathed really. Maybe despised… I think you get the point. Anyway, I launched a website called FireMartz.com which was entirely dedicated to, you guessed it, calling for Martz to be fired. I went all out. I modified the Declaration of Independence to state my grievances against Martz and made it an online petition people could sign. I started a blog for the site and I even had t shirts printed up and began selling them on the website. One of the local radio stations found out about the site and liked it so much they mentioned it a couple of times on the air. I got in touch with the station and provided them a few shirts to give away as prizes and things were going well.

Then, mere hours after I delivered the shirts and the radio station was set to start giving them away, Martz checked into the hospital with serious heart problems. He temporarily stepped down from the head coaching position and was in the hospital for several days. Needless to say, that put a bit of a damper on the site. It’s all fun and games until someone’s health is in question. The radio station obviously never gave away the shirts and Martz never returned as the head coach of the Rams. I did get interviewed by a local TV station when Martz was indeed fired (after he regained his health) but after that naturally the site was dead. Martz went on to become the Detroit Lions’ offensive coordinator and I’m stuck with 15-20 semi-vulgar t-shirts.

In hindsight, obviously basing the entire site around the tenure of a troubled coach was a bit foolish. It was certainly fun while it lasted but I didn’t ever make a profit off the site and I hadn’t positioned the site to be able to continue after Martz was indeed fired. More recent examples of this same mistake would include all the sites that were created exclusively to promoted Agloco. I would venture a guess that those sites aren’t doing so well these days. I’ve seen fashion sites dedicated to trends that end as quickly as they began. I’ve seen blogs centered around a single movie or game that do well while the topic is popular but die out as interest fades.

Had I created a Rams fan site, with a section dedicated to getting Martz fired, there’s a good chance my site would still be going strong today. I would have been able to leverage the momentary popularity of the subject into long lasting success for the site as a whole. If a fan of Agloco positioned their site as one about making money online, even with an emphasis on Agloco they would be able to continue after Agloco crashed and died. The lesson here as I said earlier is to not put all your eggs in one basket. When choosing a topic for your blog or website, make sure you’re not in a position of reliance on one person, company, or trend. Or, at the very least choose more stable topics (Apple, Google, the President) that will last for a while and know that at any time, that topic could disappear and take interest in your site with it.

17 Responses to “Learn from My Mistakes: Eggs in One Basket”